Why is Pebble Beach Golf Links unanimously rated the No. 1 Public Course in the country? Is it the prestigious championship pedigree? Pebble Beach will host its sixth U.S. Open in 2019, and its fifth U.S. Amateur in 2018. Is it the star-studded history? Pebble Beach has hosted a PGA TOUR event since 1947, rolling out its green-carpet fairways not just for the game’s best golfers, but also Hall of Fame athletes and Hollywood stars. Is it the breathtaking beauty? No. 4 tees off a stretch of seven stunning seaside holes perched atop dramatic cliffs, and Pebble Beach finishes with two of the most beautiful holes in golf. Is it the course design and strategy? Pebble Beach features some of the most famous par-3s (No. 7), par-4s (No. 8) and par-5s (No. 18) in golf, not to mention the picturesque but perilous Cliffs of Doom, and plenty of heroic shot-making opportunities.

One of the most respected and revered courses in the world begins with one of the greatest opening stretches in golf: five spectacular sand-splashed holes that cruise up and down a sea of dunes while showcasing sublime oceanfront scenery and shots you’ve surely never seen. But the defining characteristic of Spyglass Hill is how starkly the first five holes juxtapose the rest of the round. Incredible ocean views give way to the understated natural beauty of the Del Monte Forest, as the final 13 holes relentlessly examine your game with a litany of bunkers, ponds and uphill tests. Pine Valley-by-the-Sea meets Augusta National, as Sports Illustrated eloquently described it. When the Robert Trent Jones, Sr., design hosted medal play during the 1999 U.S. Amateur, no player in the field was able to break 70, and the setup maxed out at a slope of 155. Bing Crosby famously bet that Jack Nicklaus wouldn’t be able to break par at Spyglass Hill the year it opened in 1966. Nicklaus shot a 2-under 70 in his first round, but Spyglass Hill has been a demanding, yet fair, test for pros and guests alike ever since. 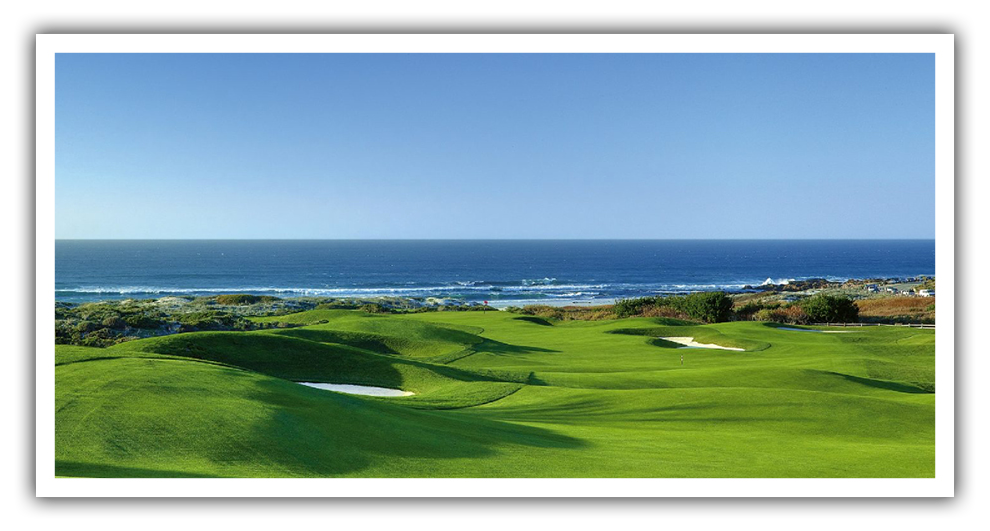 The Links at Spanish Bay

Meandering among sweeping sand dunes along 17-Mile Drive, The Links at Spanish Bay unveils some of the most spectacular seaside views in Pebble Beach. The rolling fairways gently flow through and around the gorgeous dunescape, briefly weaving between towering Monterey Pines, before returning to the white sand of Spanish Bay Beach for a thrilling finish along the coast. The spectacular setting offers panoramic ocean views of some of 17-Mile Drive’s most scenic stretches, showing off whitecaps bouncing on the powerful Pacific and a brilliant sunset. The Links at Spanish Bay is very much a sensory overload, with the smell of the beach carried in by a cooling ocean breeze, the sight of the spectacular jagged coastline, and the sound of the famed bagpiper leading you home at the end of a twilight round.